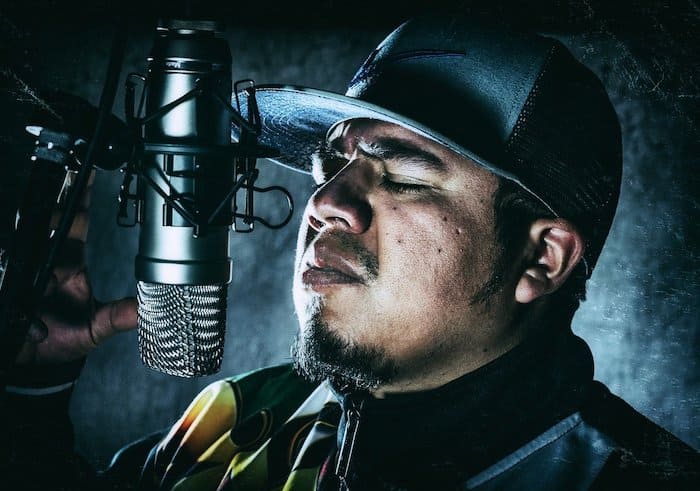 Do you want to learn beautiful and easy rap piano songs? We understand you! Many American rap songs have very beautiful productions, melodies or instrumental on piano. But which ones to choose? We help you make your choice! La Touche Musicale has selected its top 10 best rap songs with piano to play. These tracks are all available on our app dedicated to piano learning and are easy to play, even for beginners. So go ahead!

Note: all the songs presented in this article are available on the La Touche Musicale piano learning app. So you can learn to play them with ease. 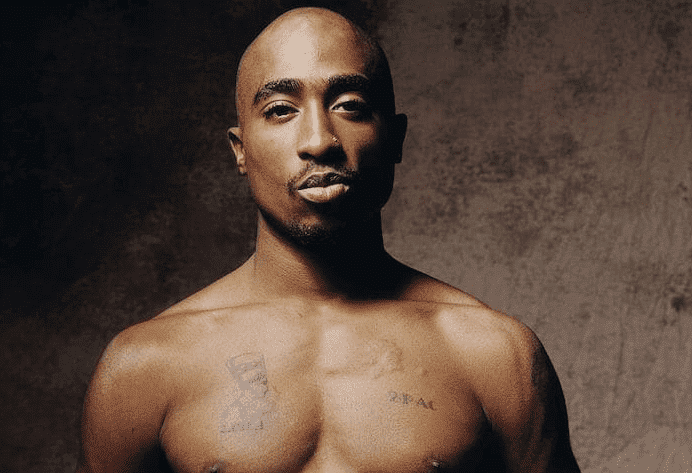 Released posthumously in 1998 in his album Greatest Hits, Changes is today one of the most internationally famous hip hop song.

This rap song with piano instrumental is wonderful. Tupac talks about all the troubles he may have encountered throughout his life (drugs, gang violence, police brutality and racism).

It’s not very difficult to play on piano and you can easily learn it on La Touche Musicale.

If you want to access the piano sheet music and the midi file of the song Changes by Tupac Shakur, you can download it here. 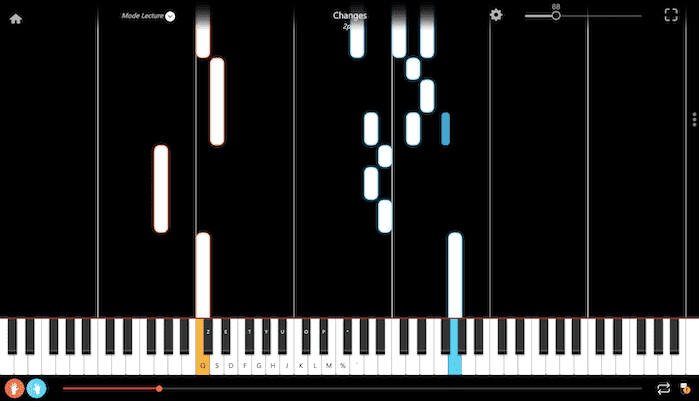 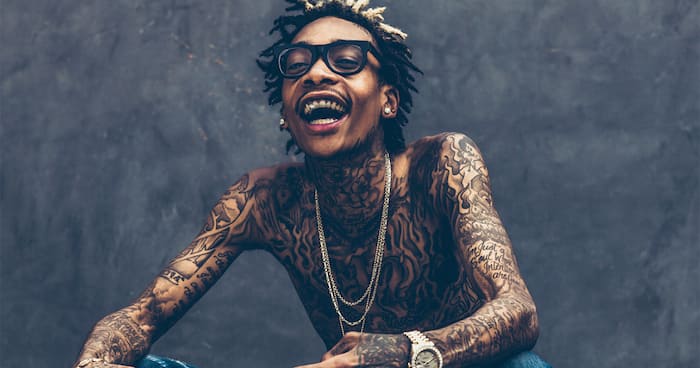 Released on his album Furious 7 in 2017, See You Again is one of the most appreciated actual hip hop song performed by the American rapper Wiz Khalifa. The artist featuring this title, Charlie Puth, is more connected to the repertoire of piano pop songs and adds a touch of freshness to the music. The cover of this rap song on piano is really beautiful and is quite easy to play, even for beginners.

By the way, if you’re looking for more easy songs, you can check out our tutorial article on Twinkle Twinkle Little Star on piano.

See You Again is an ode to a lifetime of friendship and closeness.

If you want to access the piano sheet music and the midi file of the song See You Again by Wiz Khalifa & Charlie Puth, you can download it here. 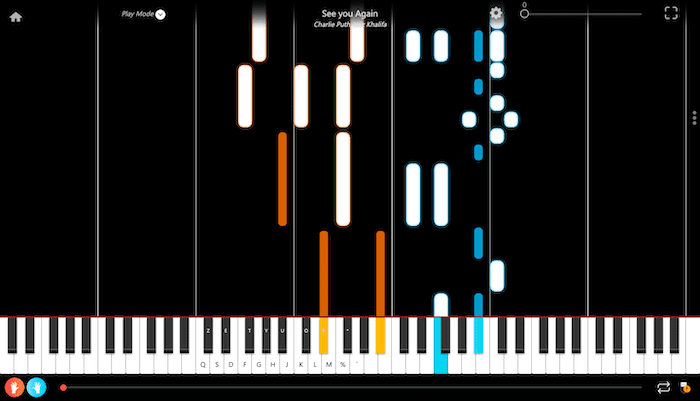 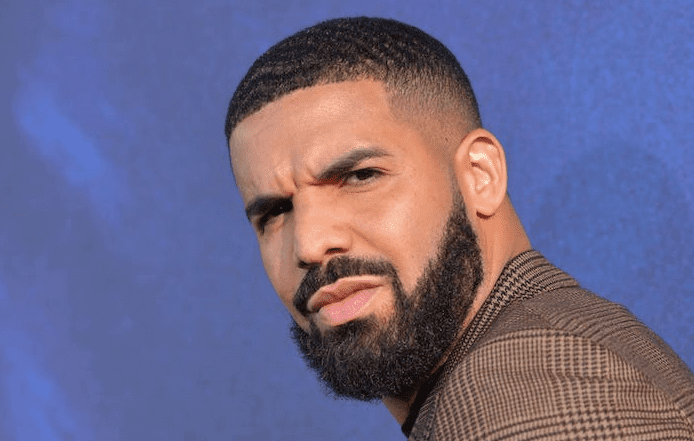 Excerpted from the eponymous album released in 2015, Hotline Bling is one of the many hits most appreciated by the successful American rapper Drake.

This rap song is very interesting thanks to its beautiful instrumental. Hotline Bling is very easy to learn on piano. Drake fans and beginner pianists, go for it!

If you want to access the piano sheet music and the midi file of the song Hotline Bling by Drake, you can download it here. 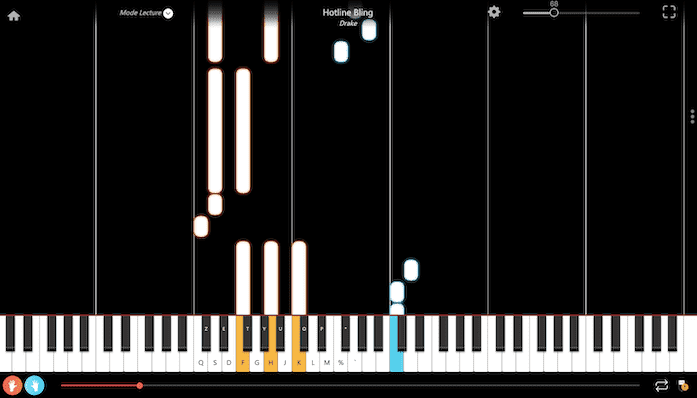 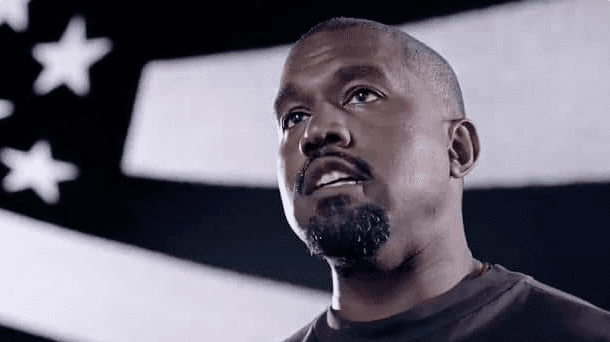 Everything I Am is a beautiful rap piano song whose instrumental is catchy and warm. Released in 2007 in the album Graduation, it remains one of the most famous rap songs of the American rapper.

In this track, Kanye West tells his story and explains that it is thanks to his personality that he got to where he is today.

In addition to being very dynamic, this song is very easy to play on piano. Its lively rhythm can sometimes make you think of jazz songs.

If you want to access the piano sheet music and the midi file of the song Everything I Am by Kanye West, you can download it here. 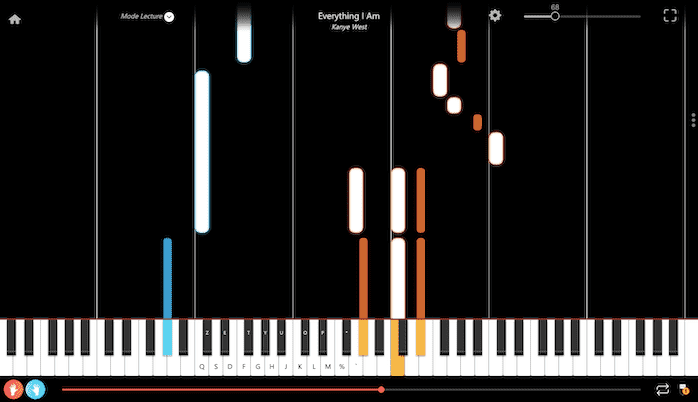 Rap piano song : learn to play Everything I Am by Kanye West on La Touche Musicale.

>> Learn easily the song Everything I Am by Kanye West on piano on La Touche Musicale app. 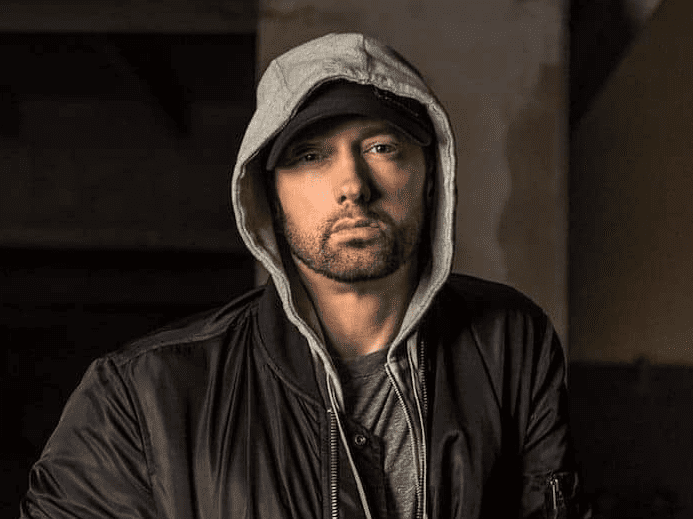 Released in 2004 in his album Encore, Mockingbird is one of the most famous and nostalgic songs of the American rapper Eminem. Dedicated to his daughters, it’s one of the least offensive songs ever produced by the artist.

In Mockingbird, Eminem evokes the troubles created for his daughters by the growing media coverage of his character. The song is a personal testimony of his relationship with his wife and daughters.

Thanks to this song, Eminem was nominated for a Grammy Award for best solo rap performance.

The song is one of those rap songs with piano that listeners who are fans of the genre don’t forget, because of its sensitivity and its beautiful lyrics. The nostalgia that emanates from this music can be similar to some classical music songs for piano.

If you want to access the piano sheet music and the midi file of the song Mockingbird by Eminem, you can download it here. 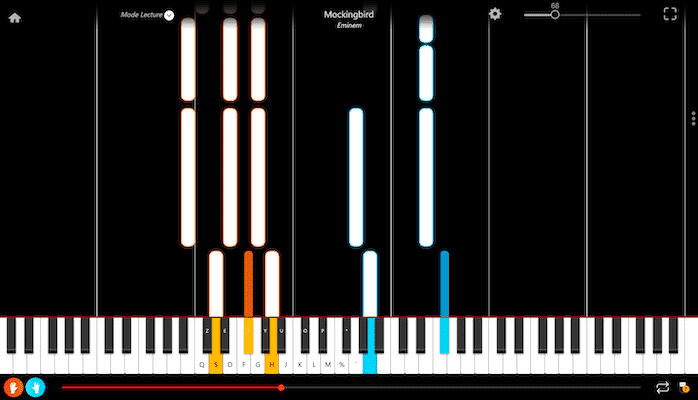 6 – The Remedy for a Broken Heart – XXXTentation

Released in 2018, The Remedy for a Broken Heart, by the American rapper XXXTentacion, is a beautiful rap song with piano. Its hip hop instrumental is very seductive and projects us into the nostalgic and difficult world of its author.

As for some piano rock songs, XXXTentacion retraces in this track his life and deals with themes such as women, violence, drugs, freedom and money.

Given the theme of the song, The Remedy for a Broken Heart could also very well have appeared in our ranking of the most beautiful sad piano music.

It’s a rap song easy to play on piano. So, even if you’re just starting out, you can learn it!

If you want to access the piano sheet music and the midi file of the song The Remedy for a Broken Heart by XXXTentacion, you can download it here.

Rap songs with piano : learn to play The Remedy for a Broken Heart by XXXTentacion on La Touche Musicale.

>> Learn easily the song The Remedy for a Broken Heart by XXXTentacion on piano on La Touche Musicale app. 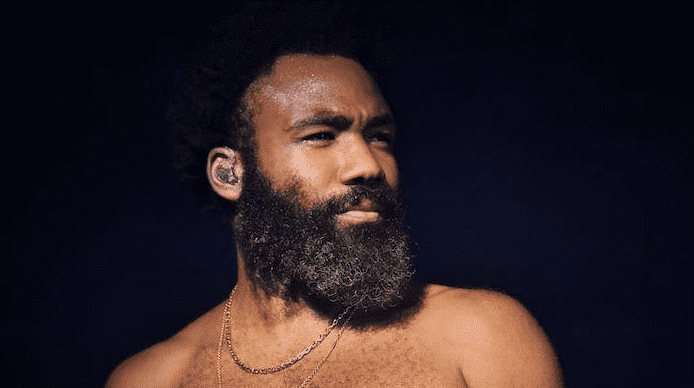 7 – This is America – Childish Gambino

Taken from the eponymous album, released in 2018, This is America is a rap song with piano written by the artist Childish Gambino.

The music denounces the violence that occurs in the United States.

It’s a  hip hop piano song that is quite easy to play.

If you want to access the piano sheet music and the midi file of the song This is America by Childish Gambino, you can download it here. 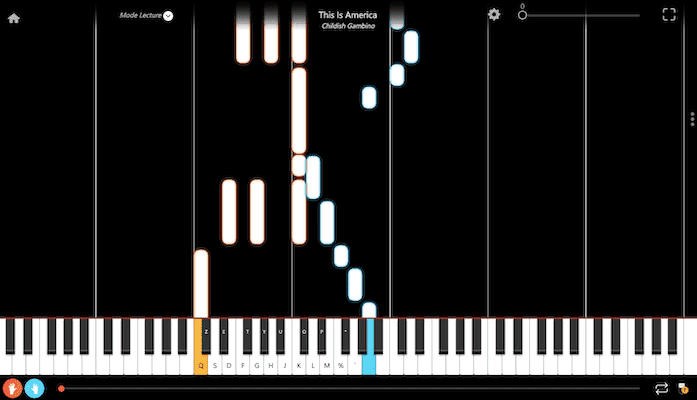 Piano rap songs : learn to play This is America by Childish Gambino on La Touche Musicale.

>> Learn easily the song This is America by Childish Gambino on piano on La Touche Musicale app. 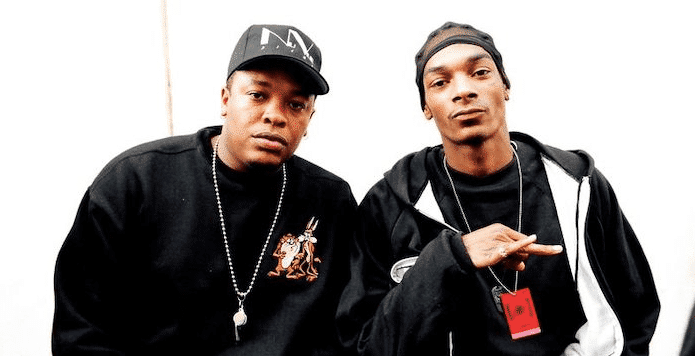 Released in 1999 in its 2001 album, Still Dre is today one of the most famous rap song with piano.

It is a mythical song of West Coast hip hop and very representative of the American rap of the 90s and 2000s.

Be careful though : Still Dre is quite difficult to play on piano. If you are a beginner, it would be better to start with another song from this list. You will be able to learn to play it on piano once you get a little more piano experience.

If you want to access the piano sheet music and the midi file of the song Still Dre by Dr Dre & Snoop Dogg, you can download it here. 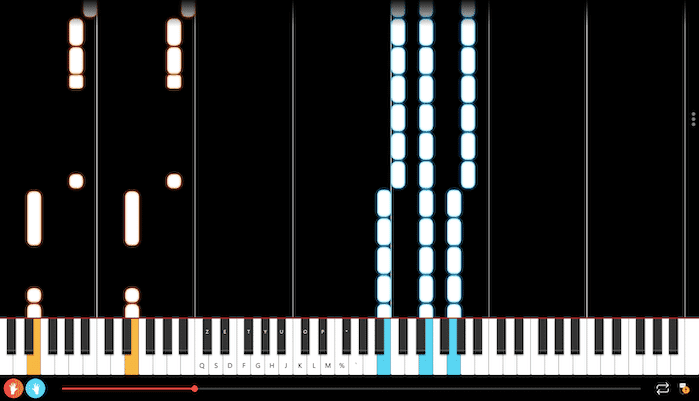 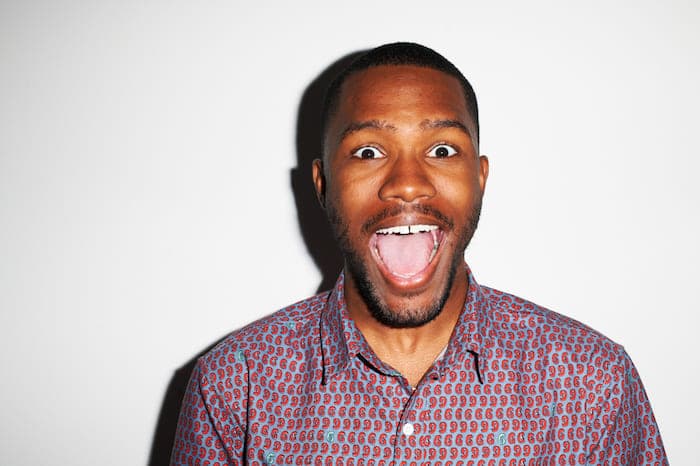 Self Control is a song written by the artist Frank Ocean and released in 2016 in the album Blonde.

The song is romantic and evokes love, seduction and sex.

Self Control is quite easy to play on piano. You’re a beginner? You can learn it!

If you want to access the piano sheet music and the midi file of the song Self Control by Frank Ocean, you can download it here. 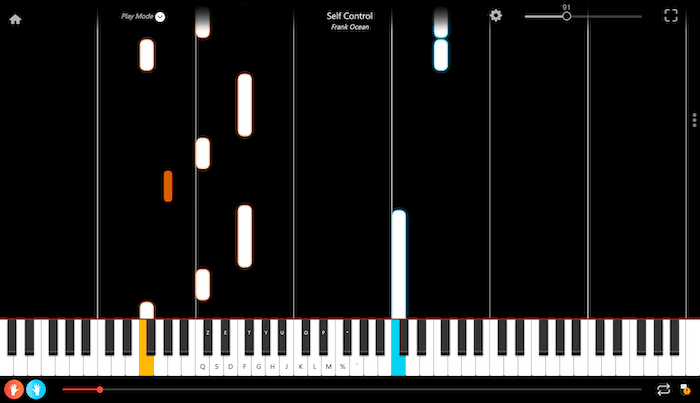 Rap songs with piano : learn to play Self Control by Frank Ocean on La Touche Musicale.

>> Learn easily the song Self Control by Frank Ocean on piano on La Touche Musicale app. 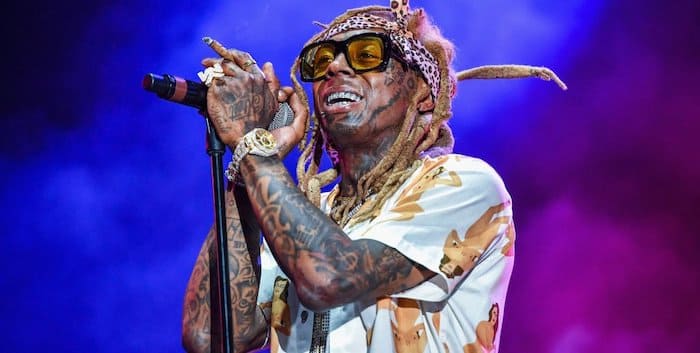 Sucker for Pain is a song written by the rappers Lil Wayne, Wiz Khalifa and the band Imagine Dragons. Released in 2016 in the album Suicide Squad, The song is a single for the motion picture soundtrack for the movie Suicide Squad.

Sucker for Pain is a rap piano song easy to play. All beginners can learn it on piano with a few days of practice.

If you want to access the piano sheet music and the midi file of the song Sucker for Pain by Lil Wayne, Wiz Khalifa and Imagine Dragons, you can download it here. 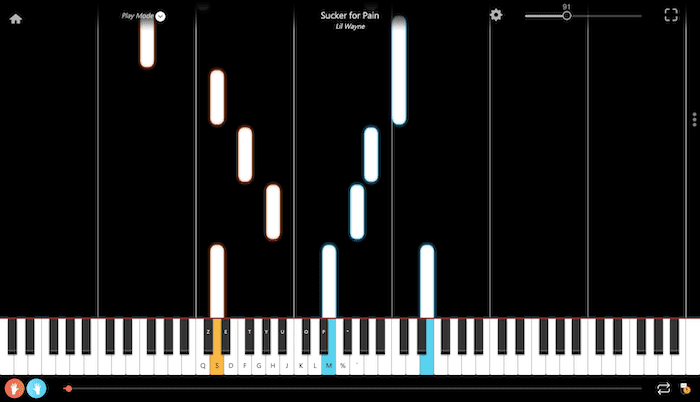 Conclusion about The 10 Best Rap Piano Songs to Play

The 10 rap songs with piano presented above, by their diversity and the beauty of their melody, will seduce you!

Of course, there are still thousands of rap songs to play on piano, but these already give you a glimpse of the richness of this musical style when you play it on your keyboard.

If you’re looking for rap piano songs for beginners, sign up for free on our app dedicated to piano learning. Even as a beginner, you will be able to play them in only a few days. On La Touche Musicale, learn piano at your own pace according to your skill level. So go for it!

La Touche Musicale app offers over 2,500 songs to play easily on the piano. Connect your piano to your device and learn to play them at your own pace while having fun. 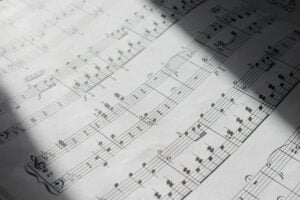 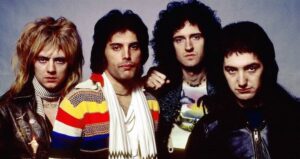 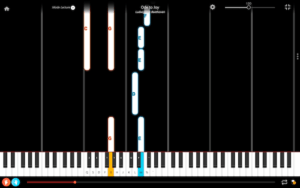 The 10 Easiest Piano Songs to Play With Letters and Notes 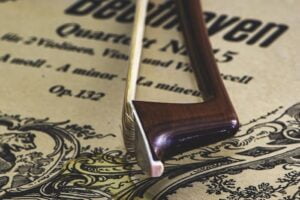 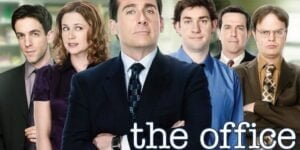 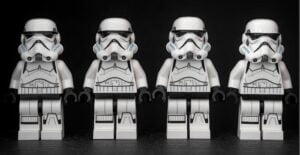 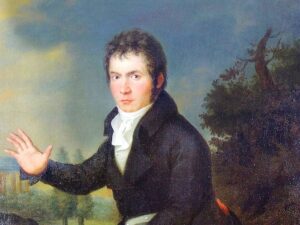